Ukrainian Pres. Volodymyr Zelenskyy tours the town of Bucha, just northwest of Kyiv, where bodies in civilian clothes were found strewn in the streets and in mass graves. Many of the victims appeared to have been shot at close range and some even showed signs of torture. https://twitter.com/GRobert1963/status/1511348659396485129

What is the position of the Prime Minister of Hungary (Viktor Orban) on the genocide of the Russian army in Bucsa, Borodyanka, Kyiv? When will he expel Russian diplomats like other countries? @orbanxviktor https://twitter.com/GRobert1963/status/1511343787141914625

A Ukrainian evacuee hugs a child in the train station in Przemysl, near the Polish-Ukrainian border. The UN says almost 3.6 million people have fled Ukraine since the Russian invasion, with more than two million of them heading to neighbouring Poland. https://www.facebook.com/George-Vitkos-Press-102401869091477

Mariupol is now a ghost city – 80% of its infrastructure is damaged or destroyed, 40% of which cannot be rebuilt, authorities say. One of the largest in the country, a beautiful, developed city razed to the ground. In case, just in case someone still has to hear this – a majority Russian-speaking city too. (21/03/22)

NYON, Switzerland — Russia’s request to freeze a FIFA ban on its soccer teams ahead of next week’s World Cup qualifying playoffs was denied Friday.

FIFA said the Court of Arbitration for Sport dismissed the Russian soccer federation’s bid for an urgent interim ruling to freeze the ban pending a full appeal, which could come within weeks.

The CAS decision means Russia will not be able to play Poland in World Cup qualifying on Thursday.

The latest ruling follows a similar CAS refusal on Tuesday to freeze UEFA’s ban on Russian national and club teams in European soccer.

The Russian soccer federation could still get the FIFA ban overturned before another round of international games in early June. A Russian victory at CAS could then force this month’s playoffs to be replayed.

Ukraine is also in the World Cup playoffs, and its scheduled game on Thursday against Scotland was postponed by FIFA until June. Ukraine or Scotland will advance to face either Wales or Austria — who play in Cardiff next week — with a place at this year’s World Cup in Qatar at stake.

Mar 14, 9:56 pmLatest talks with Russia went ‘pretty good,’ will continue tomorrow, Zelenskyy saysUkrainian President Volodymyr Zelenskyy updated the status of negotiations with Russia in his latest address Monday, saying the latest talks went “pretty good” and will continue tomorrow.Zelenskyy also addressed Russian troops, telling them they would be treated “decently” should they surrender.”On behalf of the Ukrainian people, I give you a chance — chance to survive,” Zelenskyy said. “You surrender to our forces, we will treat you the way people are supposed to be treated. As people, decently.”Zelenskyy also thanked the producer at a Russian state news channel who appeared on camera behind an anchor and held up an anti-war sign. She was later arrested.”I am grateful to those Russians who do not stop trying to convey the truth,” he said. “To those who fight disinformation and tell the truth, real facts to their friends and loved ones. And personally to the woman who entered the studio of Channel One with a poster against the war.”

Pair say they have changed locks and will offer property to Ukrainian refugees fleeing warActivists held after occupying Biarritz villa owned by Putin’s ex-son-in-lawPair said they had changed locks and wanted to offer property to Ukrainian refugees fleeing warTwo Russian activists have been arrested after breaking into and occupying a luxury villa in Biarritz owned by Vladimir Putin’s former son-in-law.Pierre Haffner, of the Svoboda Liberté Association, whose blog appears on the Mediapart news website, and Sergey Saveliev entered the eight-bedroom Alta Mira property in the French coastal resort, popular with Russian oligarchs. They announced on social media that they had changed the locks and would offer it to house Ukrainian refugees fleeing the war.The property is said to belong to Kirill Shamalov, a Russian billionaire and former husband of Putin’s younger daughter Katerina Tikhonova. Haffner and Saveliev claimed to have found one of Shamalov’s passports and a translation of a Moscow electricity bill.A photograph posted on social media shows one of the activists on an upper-floor balcony with a Ukrainian flag.Haffner, who said he was renaming the property “Villa Ukraine”, said he would ask human rights activists and lawyers to ask Biarritz city hall and the police prefecture to use it to house refugees from Ukraine.French police later broke down the door, arrested the two activists and were now holding them in custody.The exiled Russian dissident Vladimir Osechkin, founder of a human rights group that has exposed alleged rape and abuse in Russian prisons and who is on Russia’s most-wanted register, told the Guardian: “This isn’t fair. This isn’t justice … My friends were not doing any damage to this property, they were preparing it so that refugees from the war in Ukraine, including children, could stay there. That’s all they were doing. They had asked me to buy some sheets and linen for people to stay there.”On Facebook, Osechkin wrote: “In Europe, hundreds of villas were bought by Putin’s family and their oligarch accomplices. Their luxurious bourgeois life has come to a logical end, for war crimes and crimes of the regime will have to pay … Now it’s not about glamorous parties and parties in villas. It’s important to be responsible and fair in the 21st century. We continue. Stop the war.” 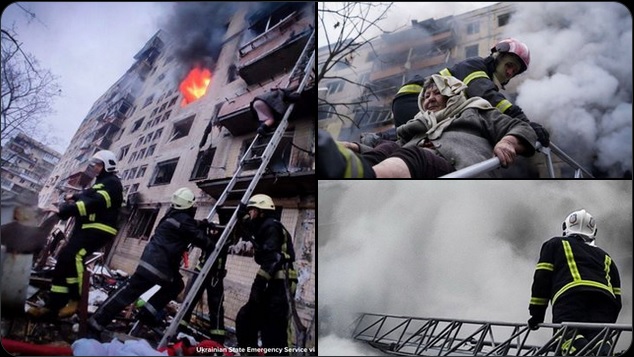 Ukrainian State Emergency Service photographs show firefighters working to save residents at an apartment building hit by shelling in Kyiv.

A child pets a cat while waiting on a bus for refugees fleeing Russia’s invasion of Ukraine, in Lviv.